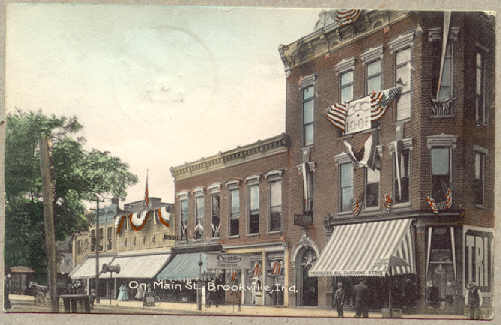 Franklin County was the sixth Indiana county, formed in 1811 from Dearborn and Clark counties.

The county was named for Benjamin Franklin.

Brookville is the county seat. It was first settled in 1804.

A person is considered a Franklin County "pioneer" if they resided here on or before 31 Dec 1825.

Four Indiana governors had Franklin County connections, as did a governor of Kansas, one of Utah and one of Wyoming.

Franklin County was formed in 1811. It was named for Benjamin Franklin.

Some of the early settlers of this county were Primitive Baptists, they came with Elder William Tyner who came from Virginia in 1797. They organized the Little Cedar Grove Baptist Church, the first church in the Whitewater Valley.  The members built a log church as early as 1805, about two or three miles southeast of Brookville, Indiana. In 1812 they built a large brick church, with balcony, and rifle por ogle.com

One further landmark in the county is the Big Cedar Baptist Church and Burying Ground on Big Cedar Creek Road, between the road to Reily and the Oxford Pike. The original church was established in 1817, as an arm of the Little Cedar Baptist church. The plain, simple brick building, but impressive in its simplicity was built in 1838. This church, like all, or nearly all of the pioneer Baptist groups in the county was originally Primitive Baptist or Hardshell. In the 1830s modernism came upon the scene, modernism and human inventions, like Sunday Schools, Missionary Societies, and organs. Organs were particularly anathema to the Primitive Party; an organ was Aaron’s golden calf. The Big Cedar congregation divided into two congregations, but the two groups arrived at an amicable settlement and both congregations continued to use the same building. The Primitives, or Hardshells, had church there on the first and third Sabbath of each month, and the Modernists or Missionary Baptists used the church on the second and fourth Sundays. Each congregation had its own wood shed. The building is now maintained in connection with the Big Cedar Cemetery Association.

Governors James B. Ray, Noah Noble and David Wallace were known as the "Brookville Triumvirate," in that they all had lived in Brookville, Franklin County, Indiana and served consecutive terms in the office of Governor of Indiana. Noble and former governor Ray were political enemies.

James B. Goudie Jr. Speaker of the Indiana House was from Franklin County.